The right reasons for discipleship 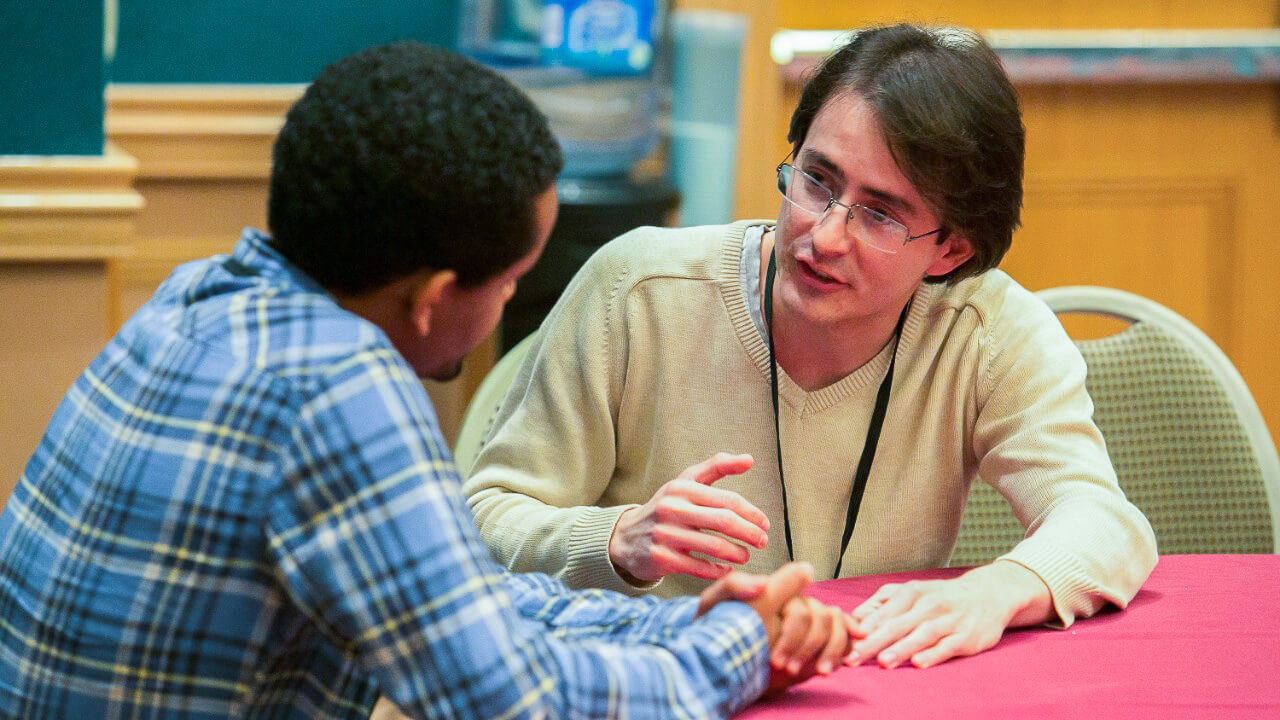 Two years after graduating from Penn State, Roger Hershey visited his alma mater and dropped in on the weekly Cru meeting. There he made an unexpected acquaintance.

After the meeting, Roger was approached by a student named Doug, who introduced himself and began to share his personal story of how he had come to Christ. As his story unfolded, Doug mentioned that he had been led to Christ and been discipled by a guy named Lee.

Roger recalled that Lee Carerra had come to Christ through a man named Jack, who was also in the Theta Chi House. He then remembered that Jack had come to Christ when Roger and a friend named Zeke sat down with Jack and led him to the Lord.

And in that moment, all the activities Roger could count as accomplishments throughout his college career – marching band, cheerleading, fraternity brother, just to name a few – paled in comparison to the reward of witnessing a life like Doug’s transformed by the Gospel – a transformation that resulted from a series of relationships, originating with Roger himself.

It’s been 30 years since that encounter, and Roger Hershey says, “I always point back to the fact that I had the privilege of investing my life in young men who now, years later, invested their lives in men... and down the road there will be hundreds of people’s lives who have changed because of the privilege of discipleship I had in college.”

Here are three reasons why:

2. Because Jesus Did it

Study the Gospels and you will see that while Christ ministered for three years to masses of people, He primarily spent his time with twelve men into whom He poured His whole life. He took them everywhere with Him, taught them, trained them, and invested His life into them. They caught the life of Christ by spending time with Him.

Jesus ushered in a spiritual kingdom that has lasted more than two thousand years because he invested his life in twelve men. Robert Coleman’s book The Master Plan of Evangelism is a study of the life of Christ and how He took those twelve men and discipled them. If we are going to give our lives to others, Jesus’ strategy is probably the best strategy.

There are a lot of ways that people grow and are developed, both in church and on campus. On campus, we have weekly Cru meetings, retreats, Bible studies, parties, worship times, and fellowship. We create an environment where people can engage in our vision and grow through large-group teaching and fellowship.

But the heart of discipleship exists within small groups of believers who are building into each other’s lives at a deeper level – being held accountable to someone who is moving more deeply into their lives to help them work out what they’re learning. As James says, we want people not only to be hearers of the Word, but doers of the Word. Doing of the Word most often works itself out in the context of discipleship relationships.

A relationship of grace is marked by a discipler who listens and seeks to understand the person. They communicate. They believe in the person. They encourage. They walk through life with the person – not only in victory, but also in failure and sin.

A relationship of truth is marked by infusing the word of God into our life – understanding it, learning how to apply it, being held accountable to live it out.

Discipleship relationships must be marked by Grace + Truth. Not one or the other. Discipleship is working out the truthful word of God in the context of a gracious relationship. Without someone relationally involved in their lives – loving them, extending grace to them, working through the hard stuff – believers may miss out on the abundant life Christ promises us.

3. Because the Benefits are Far-Reaching

The third reason we disciple is because of the far-reaching benefits of discipleship to our local movement, local church, and the body of believers around the world.

Authentic relationships can only emerge when we’re diving into one another’s lives. There is a depth within small groups and one-on-one relationships that cannot happen at a Cru meeting attended by 200 people. Depth is what discipleship is all about.

A movement has long-term growth only as leadership is developed and reproduced. For example, if we start out with 20 leaders in the fall semester, and each of those 20 leaders disciples one person, we will have 40 leaders the following year.

If each of those original 20 disciples develops two more leaders, we will have 60 leaders. Consider that Jesus started with 12. The Gospels then talk of Jesus going from the 12 to the 70.

Movement growth enables us to minister to more people. It means everyone on campus will have the opportunity to hear about Jesus and to grow more deeply in the knowledge of Him. Those kingdombuilding efforts will then in turn raise up more leaders.

Two thousand years after Jesus poured His life into the original 12 disciples, millions of people all over the world have been changed by the Gospel message. For us, movement longevity means that in 20 years, this campus will have a thriving, flourishing body of believers because of the investment made by our current leaders.

When we talk about discipleship, what is it we hope to produce? What does a mature biblical disciple look like?

As you’re meeting with a biblical disciple, ask yourself: “Where is this person?”

Article taken from The Compass.

Tim Henderson is the Campus Director at Penn State University and has authored or co-authored many of the Campus Ministry resources like Compass and The Community.

The right people for disciples

Latest Stories in How to

Small groups that reach out: Why it's better when you help others